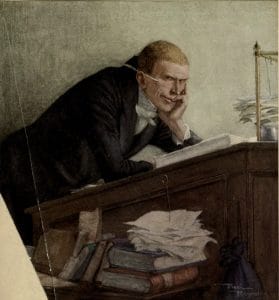 When we visualise bankers lamps, most of us would probably think of dimly lit offices in Victorian and Edwardian times. Picture, if you will, a clerk bent over, dipping his pen into his ink bottle and scribing into a large leather-bound ledger using only the light of a candle or oil lamp. It is not hard to see why there was such a need for better lighting and, with the introduction of electric light in the late 1800’s and early 1900’s, the bankers lamp was born.

The Bankers lamp was an American invention originally designed for use in banking halls (hence the name). The first patent for a bankers lamp was applied for on 11 May 1909 by American Harrison D. McFaddin. The original glass shades were made under contract in Moravia which is now part of the modern day Czech Republic. It is unclear where the bases were made but it is assumed they were made in America and put together with the shades in the McFaddin factory in New York. These lamps were originally sold under the brand name Emeralite (a blend of the words ‘emerald’ and ‘light’). 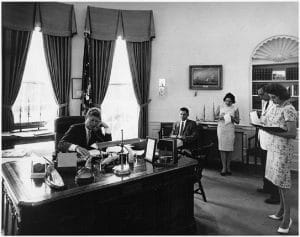 Emeralite lamps became an instant success and many business owners ordered them by the hundreds in an effort to boost the productivity of their workers. To cater for demand the designs became more decorative and included a host of additional features such as pen holders, ink wells, calendars and clocks. Larger organisations would even have had the company’s logo embedded into the glass shades.

The picture above is from 1962 and shows the late president of the USA, John. F. Kennedy, sat at the Resolute Desk in  Oval Office of the White House. This is a well lit room with lots of natural daylight but the President has a substantial bankers lamp sat on the desk which would have provided extra light in the evenings. The famous Resolute desk is a beautifully carved oak desk that has been used by most American presidents since it was presented to President Hayes in 1880 by Queen Victoria.

Why were the original glass shades green? When we think of traditional bankers lamps we always imagine them with green shades and although you can now get bankers lamps with shades in almost any colour, it was no accident that the original ones were green. Green was, and still is, considered a tranquil and calming colour seen to aid concentration and creativity. The light shining through the glass was softened by the green shade making it easy on the eye whilst still giving enough light to work. This is also why bankers and accountants used old fashioned green visors. This soothing ‘green effect’ is still in evidence today in theatres and TV studios where ‘green rooms’ are used to help calm and settle nerves before a performance.

H.G. McFaddin & Co. was dissolved in 1960 and original lamps dating from before the Second World War are now sought-after antiques. They are not easy to find and even if you are lucky enough to find one you will have to pay a good deal for it and it may need re-wiring. But the good news it that there are now modern reproductions that are far more affordable. 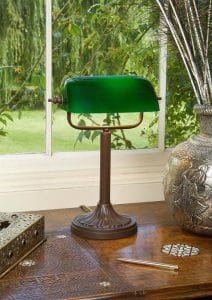 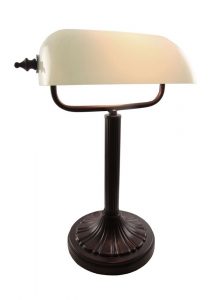 Two versions of the same bankers lamp, one with the more traditional green trough shade and the other with an opal white glass shade. Both have the same decorative dark antique bases. 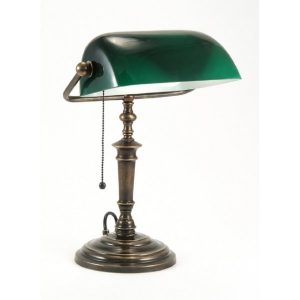 This traditional bankers lamp is one of Bespoke Lights best selling table lamps. Manufactured in the UK from solid brass with a natural tarnish that is hand waxed and buffed to replicate a restored antique. This lamp has all the features of the original Emeralite lamps – the heavy base, the green shade and the metal light pull. Just perfect for a traditional period study. light. 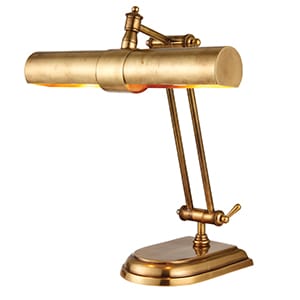 A recent addition to our desk lights is this Winchester lamp, which, although not strictly a bankers lamp, has many of the same features and with picture lights and wall lights to match makes for a great co-ordinated look for the traditional home office. A simple stylish light made in solid brass with an adjustable arm to position the light.

Bankers lamps are still popular today and with all they have to offer it is easy to see why this iconic design classic has stood the test of time. Although still used predominately as functional desk lights, they can also be seen in hotel lobbies, on top of pianos, in libraries and many other locations where they a bring a nostalgic elegance and old-fashioned charm. The perfect way to add some traditional stylish elegance in a world filled with modern gadgets. 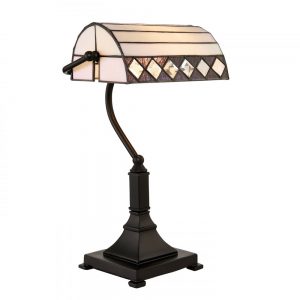 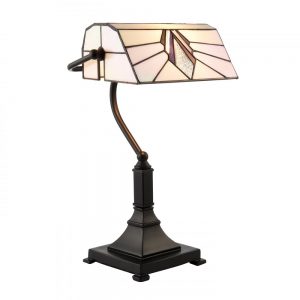 These striking bankers lamp desk lights are from our Kensington Tiffany Collection and are hand crafted using the finest Tiffany glass. They are in a typical Art Deco style with clean geometric patterns and have the classic bankers lamp trough shaped shades. The Fargo lamp on the left was used in the popular ITV production ‘Mr Selfridge’. The Astoria lamp in the right is aptly named as it takes its inspiration form the Art Deco cinema style of the 1920’s and 1930’s. A range of ceiling lights, wall lights and other table lamps are available to match both these lamps.  Simply click here to view them on the Bespoke Lights website. 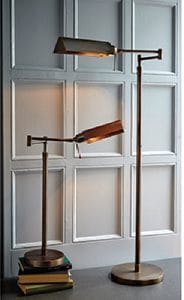 The recently introduced Clarendon bankers style desk light and floor lamp are a great way of providing task lighting in traditional home offices. A distinguished look that combines trough shaped bankers lamp shades with a swing arm mechanism to give a versatile working light wherever it is needed. Made in brass with an antique patina that will add a rustic characterful touch.

With so many choices on offer it can be hard to select the right lamp. If your study or room is dark using a bankers lamp with a dark shade may not be the best option, so it might be better to opt for one with a paler or more vibrant coloured shade. If the room has good natural light then you can go for the traditional dark green or one of the richer colours like dark blue or maroon which will add warmth. Choose a bankers lamp of the right size for your situation – if your desk is small having a large bankers lamp will make it seem more crowded but on the other hand if you opt for a small lamp on a larger desk it will appear insignificant. Above all enjoy the beauty of these iconic lamps and spare a thought for those early bank clerks and accountants.

Hope this has been helpful to you, feel free to share.